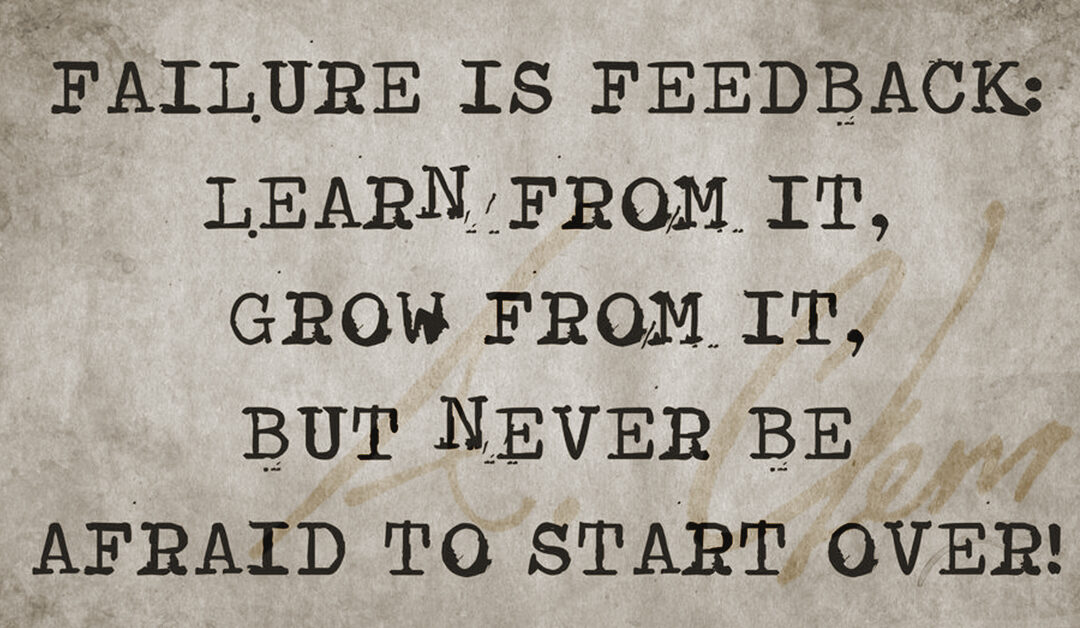 I think we’re all familiar with the notion that you can learn from your failures. But learning from failure is so much more than just a simple notion. From my experience, some of the most effective leaders I’ve been around not only learn something, but they also find opportunities in their failures, and in the failures of others.

Effective leaders understand the importance of learning from other peoples’ failures. Think about it. We’ve all watched someone develop bad habits that lead to failure, whether it’s an addiction, or even nurturing a lackadaisical attitude about their responsibilities. And if you haven’t seen it firsthand, you have certainly read the countless stories about public figures who’ve gone through failure and witnessed the outcomes.

Then there are lessons that come from what I consider a known reality. For example, we don’t need to smoke to learn that cigarettes are bad for us. The warning labels tell us that, not to mention the countless cases of lung cancer tied to cigarette smoking. My point here is simply that you don’t have to learn from just your failures. You can learn by using your eyes and ears to observe the failures of others – and gain something out of it without going through it yourself.

Effective leaders are empowered by failure

How can I say effective leaders are empowered by failure? Because it’s my truth. A very hard lesson for me has been coming to terms with the fact that I hate to lose. I mean I hate to lose even more than I like to win. This is something I’ve had to really work on, so let me tell you a story about a lesson from failure that has empowered me to be a better business leader.

I grew up playing baseball, and even played for McKendree University while I was attending college. I was averaging the mid to high two hundreds (you’re at the MLB level if you go three for ten, which is batting three hundred), so I had a long way to go but I enjoyed the game. At that young age, it was hard for me to not just go for it every time; to really understand the situation and be okay with a failure like striking out or not getting on base.

What I learned was that I was insecure. I cared way too much about what people thought. I was a decent player, I was in pretty good shape, and although I knew I wasn’t going to the next level, I fiercely wanted to perform. My stress levels dropped dramatically when I figured out that sure, if there’s an opportunity to get a runner over or score a run, do it. But the most important thing is just to get on base so you can keep the inning alive.

Even better, I realized that baseball is a lot like life, because unless you’re losing the final game of the World Series, you get another chance – another inning; another at-bat; another ballgame; another season. It was an impactful lesson from multiple “failures,” and it has been incredibly empowering for me and the people I endeavor to motivate and inspire.

Still relating baseball to business, in both, there are so many things that will go wrong. I passionately believe good business leaders know it’s okay to make mistakes.

In baseball, they keep track of everything. They keep track of errors, batting averages, pitch count and stolen bases. The list just goes on and on. That strategy is in the data and that is what superstar teams use to grow and improve.

In business, you’re also measuring everything and collecting data. Hopefully, you have a system and you’re measuring items like:

That data can highlight issues, but  it all comes down to recognizing that mistakes are inevitable. And, it’s okay as long as you’re keeping track so you can learn from those failures and determine where to go from there.

Progress comes out of failure

Here’s the thing. I think people are so unwilling to take risks because they’re afraid they’re going to fail. My response to this is, don’t be so damn insecure. And let me just save you the distress of the end of the story. It’s like riding a motorcycle. It’s not if you’ll fall off, get hit, or spill the bike, it’s when. That’s just the fact. Anybody who has ridden a motorcycle is not going to disagree or get emotional about that reality. It’s something they just deal with. Of course, you can better protect yourself by being alert and defensive and wearing protective equipment, but it all comes down to understanding the risk and being okay with it. Failure is an unavoidable part of life and business. Embrace it!

Understand this, too. The last thing you want in your organization as a business leader is people not willing to take risks (within reason, of course). Because people are going to mess up, but it means people are making decisions. When decisions are being made, that means people are moving forward, and the organization is moving forward. That’s what you want. Additionally, if you want to scale and not be involved in everything, you need others to learn through failure too. It’s probably good to emphasize here that I’m talking about new failures.

At the end of the day, your biggest asset is your time. So, if you take that risk, what have you got to lose but a little bit of time and maybe some money? Alternatively, you will have gained in experience and character. There can be no price put on these invaluable rewards.

As Richard Branson so wisely says, “Business opportunities are like buses, there’s always another one coming.” What I say to you is, it’s time to deal with your insecurities, embrace the reality that you’re going to fail, and just go for it. Go for it!